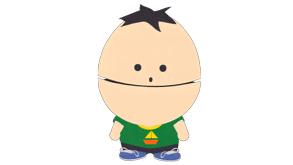 Once described as a "little freckled kid that looks like a football", Sir Ike Broflovski is Kyle's beloved little brother and the apple of his parents' eye. Ike has had no shortage of adventure and mischief in his life, and while he may be far more intelligent than he appears, he can always count on his big brother Kyle being there to protect him... even when Ike might not want him to be. While the two of them may play the increasingly sparse game of 'Kick the Baby', it's clear that Ike and Kyle will always have each other's back.

Although he doesn't always show it, Ike is a certified genius - despite being three years old, he now attends South Park Elementary alongside the Kindergarten class, many of them two years his senior. With a little help from classmate Sally Bands, he was narrowly elected Class President over the expected victor, Filmore Anderson, who has remained Ike's chief rival and bully in class to this day. Ike also had a passionate, romantic sexual affair with their teacher, Ms. Stephenson, that resulted in her arrest and subsequent death.

Though the Broflovski family all love him as their own, Ike was actually born in Canada as Peter Gintz, to Harry and Elsie Gintz. In the wake of the disastrous Cola Wars, he was placed up for adoption, and the Broflovski family welcomed him into their home, floppy head and all. Kyle discovered this truth as a third grader. Due to being raised away from his people, Ike isn't fully in touch with their traditions, such as singing Chuck Mangione every day, but he tries to stand with his people, whether it's to protest or rescue the Princess of Canada.

It's also worth noting Ike, like his brother and to a lesser extent his father, has always embraced technology. Ike has his own computer, which he uses to stream anime on CrunchyRoll (see "TrollTrace History", below) as well as to play video games like MineCraft, and watch Pewdepie's video game streaming series. He's even as a capable hacker like his brother, assisting Barack Obama and John McCain to assist in their diamond heist by listing them as deceased in a coroner's computer. He and his brother also worked together to troll the entire world online and hack TrollTrace, triggering a 'reset' for the entire internet.

For a period, Ike was terrified by supernatural visions of dead celebrities, such as Billy Mays and David Carradine, but after "Ike" won the Grand Little Miss pageant, they all finally moved on. Ike's not really been too impressed with other celebrities, but he and his classmates love Pewdepie, and Ike's favorite TV shows include Yo Gabba Gabba!, Dora the Explorer and the McNeil-Lehrer Report. (It's best not to interfere when he's watching the last one, or else there might be... consequences.)

Ike has a number of short catchphrases that are used sparingly.

Ike's most treasured alter-ego seems to be that of the Maplebeard, the Pirate King, which originated as part of his work with Cartman's pirate crew, but has since taken a life of its own as one of the Fighters of Zaron. He's had a number of other costumes since, including one from his stint at Clown School.

Ike has a loving relationship with his family, who have always considered him one of their own. When he was briefly returned to his biological parents in Canada, they were devastated at the loss, leading Kyle and the boys to visit Canada to get him back. Though his mother terrifies him to no end, and he doesn't fully approve of his father's trolling, they all love each other no matter what happens.

His relationship with his extended family hasn't really been explored.

Ike has only ever met his biological parents on one occasion, when they came to take him home to Canada on orders of the Prime Minister. (He wanted to stay with the Broflovski family, but Harry had chocolate.) Kyle journeyed bravely to be reunited with his brother, and when they saw how far he'd come, the Gintzes allowed Ike to go back to his family in South Park.

Ike had a crush on his second kindergarten teacher, Ms. Stephenson, for a long time, and when they had a discussion about his feelings, she realized she shared them as well. Kyle brought their affair to light out of fear of Ike rushing into a serious relationship too young, and she committed suicide, assuming that Ike would follow her.

He's been single ever since.

After Kyle took him to see Yo Gabba Gabba! Live while Ike was undergoing puberty, Ike chose to 'tame Foofa's Strange' for his 'cool cool trick'. Though the other Yo Gabba Gabba members instructed Ike that this was sexual assault, Foofa was more interested in the possibility of working in adult entertainment, Foofa enlisted Ike as her manager, and she began a successful career with his assistance. He eventually resigned his position.

Ike seems to be friendly with a number of his kindergarten classmates, who elected him Class President in a narrow majority, with help from Sally Bands, who managed his campaign. Many of his classmates hang out at his house to watch Pewdepie videos with him as well, including Quaid, who is also best friends with Ike's rival, Filmore.

He also came to forge a friendship with Ugly Bob when they worked together to save the Princess of Canada from Tooth Decay, though he still seemed to find that Scott was a dick, even when they banded together. He's also been employed by John McCain to help him and his team fake their deaths.

He's recently been noticed sending e-mails to Firkle Smith, as well as Daniel Smith and David Harrison but the extent of these friendships is unknown.

Ike has a fierce rivalry with Filmore Anderson, who challenged him to be the Class President when he was new, and has always been the first to lead to bullying Ike, including when his crush on his teacher was exposed. The rivalry has always been stronger from Filmore's side than Ike's, however, and they do spend time together as friends sometimes.

He also helped defeat the evil Tooth Decay, who had taken many from all races, including the Canadians.

While Ike isn't known to have any true role models, there are a few famous figures he seems to be fond of. He's a regular viewer of the McNeil-Lehrer Report (now PBS NewsHour) starring Jim Lehrer and nobody dares interrupt his viewing. He's also a huge fan of Pewdepie's videos and

Ike has less often been a member of a larger organization as other characters, but he was convinced to enlist as a member of Eric Cartman's Pirate Crew by the promise of travel and riches on the high seas, and proved to be one of Cartman's favorite team members. It may be worth noting despite proclaiming Jews can't be Pirates, Cartman allowed Ike on to the team.

Stan Marsh recruited Ike for his Pee-Wee Hockey Team as a potential star player, and he proved well fit for the role, until they ended up going against the Detroit Red Wings, who beat the shit out of him.

Ike has always lived with his family at the Broflovski Residence, aside a brief stay in Canada, and is lucky enough to have his own bedroom upstairs with a crib, and a computer. 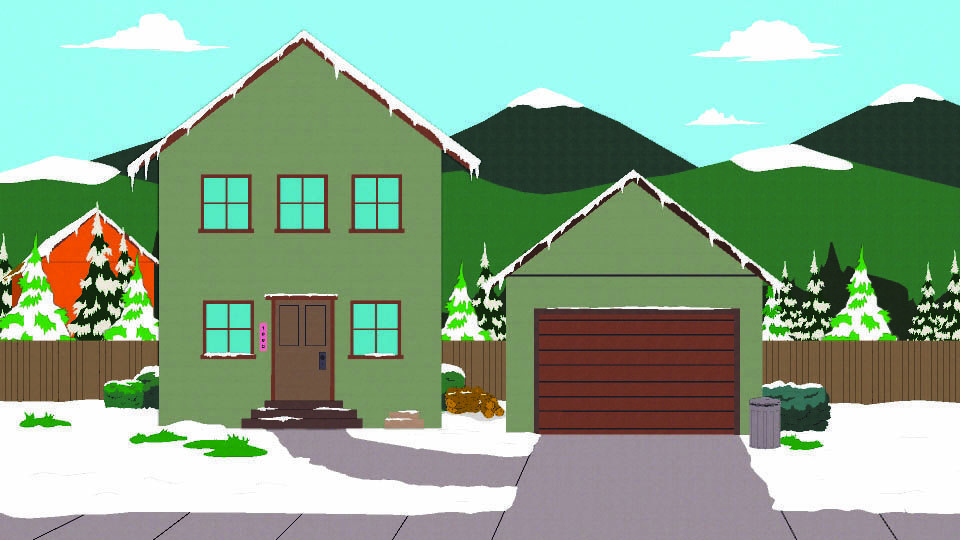 South Park: The Stick of Truth

Maplebeard the Pirate King can be found at the Neighborhood Park playing with his some other pirate kindergarteners. When the player confronts [The Lord of Darkness]], Ike plays a role in setting off fireworks, and can be befriended, and later plays an even more valuable role in helping his big brother and the New Kid save the town, with the ultimate 'Kick the Baby'.

Ike is one of the key characters in the mobile game, with multiple themed Ike cards available to the player, such as Gizmo Ike and Smuggler Ike.

Ike was the original character with a 'flappy head', a design choice which wasn't intended to confer significance, but it soon became a fixture of all Canadian characters on the show, so "Ike's Wee-Wee" revealed that he was an adopted child from Canada.

Since the tenth season or so, Ike is usually shown wearing a green shirt and shorts outfit during the daytime or when outside the house, but at night, his classic blue pajamas still appear.

Ike's voice actor or actress has changed frequently, as to assure he always sounds like a young child. This voice was usually been provided by the child of a crew member of the show, but there are challenges to using a child voice. Some parents don't allow their child to swear, even for South Park, so placeholder words are used, and then censored to sound like swear words, such as using "shoe" to sound like "shit" once 'bleeped'. As a result, some sequences where Ike or other young children swear remain censored even in 'uncensored' audio tracks.

During the production of "Taming Strange", Ike was given a more 'mature' voice in order to sound like a teenager, supplied by Matt Stone, and he and Trey considered keeping it, but decided the baby voice always got the best laughs.

As of Season Twenty, Ike's voice is being provided by Betty Boogie Parker, Trey's real-life daughter, who has no problem swearing for her daddy.

Prior to production, the writers toyed w/ the idea of making Ike look bigger, like a pubescent teenager.

In "The End of Serialization As We Know It", Sheila looks up Ike's internet history to confirm his identity as Skankhunt42, and we get a glimpse at what Ike really does online.

(Note that some of the same material was re-used for multiple days because Sheila is scrolling. Errors in days/times are from original.)