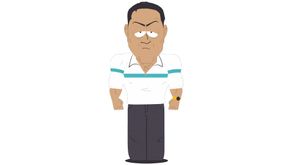 Host of the reality TV series The Contender, the famous actor Sylvester Stallone is so impressed with Wing Lu Kim's singing that he offers her (via a handy translator) to sing at his son's wedding - a gig the boys work hard to get her to, despite the efforts of the Chinese mafia. He later joins Tom Cruise's class-action lawsuit against the town.