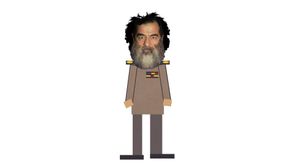 The dictator of Iraq, Saddam Hussein has but three desires - the first is to take over Canada, the second is to conquer the world, and the third is to have kinky sex with Satan. While he nearly succeeds in taking over Canada twice, he was thwarted both times by the boys. He was killed by a pack of wild boars trained by the U. S. Government - initially, forging a relationship with the ruler of Hell, Satan, but after screwing up their comeback take-over on Earth, he was killed once again. He returned to Hell but his relationship with Satan came to an oily end after Satan had a talk with God and decided to stay single. He was then exiled to Heaven, where he built weapons of mass destruction disguised as a chocolate chip factory.

He inexplicably was resurrected as a member of the Legion of Doom mere weeks later and put into motion another plan to take over Canada, posing as the new Prime Minister and issuing strange laws that alienated the populace. He was discovered in a spider-hole posing as the new Prime Minister and promptly captured by the Canadian mounted police, and paraded around on Christmas. He was later executed and hanged, and footage was captured on a mobile phone - by Eric Cartman. He has not been seen or heard from since.