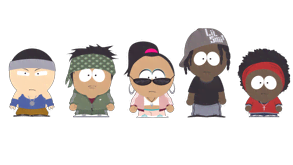 These kids from Orange County seek out the boys at True-Value in South Park and proceed to serve them. The boys aren't sure how to react to their sweet dance moves at all, and take it. The Dance Crew seeks them out again for a rematch, challenging them to show up in Orange County for a dance-off. Stan Marsh is forced to band together the South Park Diggities under the advisory of Jerome "Chef" McElroy and Randy Marsh in order to prevent him from getting served again. The Orange County kids don't survive though, murdered by Butters Stotch's tap-dancing talent in an unspeakable but forgotten tragedy.