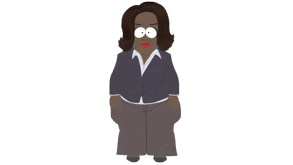 A famous talk show host with a lavish lifestyle who commands an army of fans, Oprah gives out free cars, books and torches on a regular basis. She likes to think of herself as more powerful and intelligent than others, and leads an angry mob to kill Towelie after she humiliates him on her show. Her vagina and asshole have gone wrong after years of being forgotten and have since died, though this did not stop her from joining forces with Tom Cruise to sue the town of South Park. Her breasts have been the subject of jokes by both Herbert Garrison and Eric Cartman.