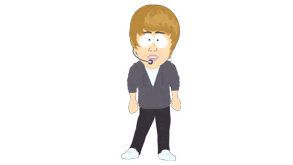 A famous pop singer with a ridiculously high-pitched voice who may or may not be of noble Canadian descent, Justin Bieber came to stardom on YouTube with the help of Usher. He briefly reigned as a singing sensation popular with teenage girls... until C'thulhu, under the command of the Coon brutally murdered him in front of millions of fans. He certainly hasn't been forgotten though - most of the younger girls in town are big fans of him. Annie Knitts even has a Justin Bieber of toy of her own.

Death to the Hellspawn

Justin Bieber was killed off in Coon vs. Coon & Friends.