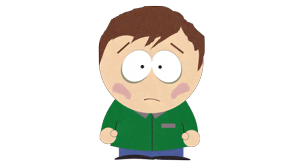 Billy Circlovich appeared in the Season Four episode, The Tooth Fairy's Tats 2000 and is seen again for the second and final time in the episode The Wacky Molestation Adventure, where he is seen in the background waiting for his parents, along with other children.

In The Tooth Fairy's Tats 2000, he is featured on a news report as a boy in need of a bone-marrow transplant. He needs 600 more dollars for the transplant, which he is told will be given to him by the Tooth Fairy. He is filled with joy as the reporter gives Billy's parents the money behind his back and states his address. The report is revealed to be a trap set by the dentist, Tom Foley, to lure kids in the tooth-trade to get the money. Later, after Billy sleeps, Eric Cartman comes as the tooth fairy and takes the money, waking him up and sounding the alarm set by the dentists. At the end of the episode, Billy looks at the $600 in his hands with joy.

He appears very sickly, with bags under his eyes and sunken in cheeks. He has brown hair. He wears a green shirt and blue jeans.