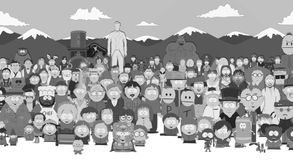 Well known for his show The O'Reilly Factor on Fox News, Bill O'Reilly hosts his show with a 'balanced' perspective, at least from a certain point of view. He is most known for his political punditry and opposition to liberal policies and programs, though he is also a popular published historical novel author. He hosted Darryl Weathers as a White Trash Redneck Conservative and Aging Hippie Liberal Douche to talk about the future immigration issue and kept his neutral resolve as they dissolved into pointless arguing.