zzyzx 2 wrote:What's with this image from the film:

At the end of Episode VI, Darth Vader removed his mask and he looked like a humpty dumpty head to me: 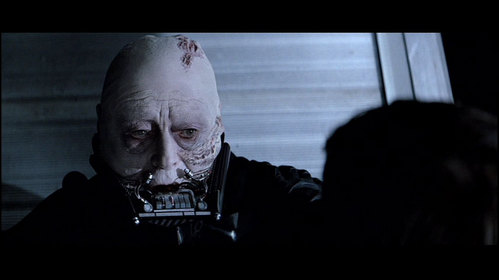 In the current movie, you see something like a skeleton, with teeth! Makes no sense.

If you'll recall, in Return of the Jedi, Luke drags Vader's body out of Death Star 2. During the big Ewok party, we see Luke in front of Vader's funeral pire; mask back on. Those "teeth" are the slats on the front of the mask. Kylo Ren is holding Vader's partially melted helmet, not his skull.


zzyzx 2 wrote:And why did R2-D2 wait until the end of the movie to reveal that he had in his memory banks 99% of the map? BB-8, the focus of the entire movie, only had 1% of the map. If R2-D2 would have revealed his 99% earlier in the film, the Resistance certainly could have flown to the unmapped 1% and would have found Luke Skywalker hanging out in Ireland.

Give 1% of a star map to any astronomer worth his salt today and they will identify it for you in a matter of hours. Even if it's from a non-Earth perspective. Apparently there are zero competent stellar cartographers left in the Star Wars universe.


zzyzx 2 wrote: J.J. Abrams, with his second Star Trek "Into Darkness" being voted the worst Star Trek film in the franchise history, has given a protege, Justin Lin, the director's chair for Star Trek Beyond as Abrams was busy with Star Trek VII.

jfast94 wrote:Since I have Star Wars on my mind, how'd you all feel about the light saber battles? This one reminded me more of Empire where it was little finesse mashed with just wild brute force, where the prequels were more choreographed. What do you guys and ladies prefer? I kind of like the Empire/Force wakens style.

I think as far as light saber battles go I liked the prequels though the force wakens was good to. I just didn't like mark hamell's acting with him against Darth Vader and with a light saber for some reason.


I liked Mark Hammell's acting better in Empire than Return of the Jedi. The cockiness in Empire was more endearing than the smugness in Return.
Top

Big-Will wrote:I guess he was waiting for Luke to come back for him. When that didn't happen, he woke up when BB-8 showed the piece of map it had in its memory.

Another no explanation point in the movie (like CP3O's red arm, why?!!) I just think they could have done something better, like have Rea fix R2 somehow instead of R2 hibernating. Overall, the movie wasted a lot of time with pointless scenes when they could have used that for better character development.

I forget about C3PO's red arm but I think that it will be covered in the comic books or maybe a movie but the info on it is available online.


Is the red arm even crucial though? Will it be like idle hands where the red arm does a thing of it's own and starts choking out people? I just don't see why it should even be mentioned. hell, if they are going to do that then explain why C3PO has one silver leg. I've been wondering that for years.
Top

Here is a link that tells of some new cast members to the next film Star Wars VIII and also has a short teaser trailer to this next movie.
http://www.msn.com/en-us/movies/news/st ... li=BBnb7Kz
What seems to be the officer problem?
Top

JamesPup wrote:Here is a link that tells of some new cast members to the next film Star Wars VIII and also has a short teaser trailer to this next movie.
http://www.msn.com/en-us/movies/news/st ... li=BBnb7Kz

I always liked Laura Dern ( Enlightment was and is completely underrated). Well the first 30 minutes of the movie jutST have Rea waiting for Luke to take the light saber until she complains her arm is getting tired?
Top

Mark Hamill lets people believe that Luke Skywalker is gay if they want to.
http://www.msn.com/en-us/movies/news/ma ... li=BBnb7Kz

I would hate it if they made Luke gay. I really like to feel like Luke as he is my favorite character in the Star Wars franchise. Also is this saying that Rey is not Luke's daughter?

I can live with new characters being made gay that haven't been written yet being straight. This is like Yaoi of straight people to me. Can't we just let the straights be straight and the gays be gay?

I would be sexually confused if Luke ends up gay.

What seems to be the officer problem?
Top

Here is a nice YouTube video of lots of the Easter Eggs in The Force Awakens https://www.youtube.com/watch?v=DglBQf3 ... khpq8uWLFQ
What seems to be the officer problem?
Top

So the official trailer for ‘Rogue One: A Star Wars Story’ is out. Here it is http://www.msn.com/en-us/movies/news/%e ... li=BBnb2gh

I think that it maybe too much to have another female as the lead in a Star Wars movie. Also I don't know but get a weird feeling that Rogue One may be the worst Star Wars movie ever. Maybe it will just be no one goes to see it? I get a Tomorrow Land feel from this one. Maybe Star Wars will finally show that one of its movie can do badly?
What seems to be the officer problem?
Top

JJ Abrams has revealed that Rey's parents were not in The Force Awakens. So that means Luke is not her father.
http://money.cnn.com/2016/04/15/media/s ... index.html

I can't wait to hear about Rey's past and who her parents are.
What seems to be the officer problem?
Top

http://www.msn.com/en-us/movies/news/al ... li=BBnbfcL
What seems to be the officer problem?
Top

Darth Vader will be in it, the Empire will have new weapons for the movie, and a new Empire villain who is out to rise in their ranks is there.

Somewhere else I read about Star Wars 8 and how there may be a story of a brother and sister that were the first of the force where the boy turns to the dark side and the girl the light where force trees or whatever are involved. Also Luke may take apart two lightsabers using the force and put them together in a scene. So I guess Luke does have a saber on the planet he was hiding on.
What seems to be the officer problem?
Top

So it seems my theory might be right that Luke will die in 8 after what this article says and also Leia may die in 9 then. It just sounds right to me.
What seems to be the officer problem?
Top

The trailer for Rogue One: A Star Wars Story was released it and looks amazing:

I like that they decided to release a trailer that was deliberately more complex and bleaker in tone than The Force Awakens. By choosing to stand apart from the tone of The Force Awakens rather than embrace the tone that just made them 2 billion dollars has instantly made me much more interested. So far Gareth Edward's, who's 2014 remake of Godzilla I absolutely loved, continues to impress me as a director.
Send me a message (PM)
Follow me on Tumblr!
Top